I finally found some time to create Ubuntu packages of PackageKit. PackageKit is an effort to provide a common, sane and smooth software installation process among all/most distributions. Currently the APT backend (used by Debian and Ubuntu) only allows to search and refresh the cache. But a lot of people are interested in bringing it forward.

You can download the packages from the personal package archive (PPA) of the Ubuntu PackageKit team:

There are some basic demo/prototye applications for PackageKit, that are part of packagekit-gnome. 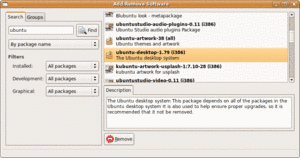 The long term plan is to port gnome-app-install and update-manager to PackageKit. But they won’t be shipped before Hardy+1, since Hardy is going to be a LTS release providing a stable and rock solid platfom.